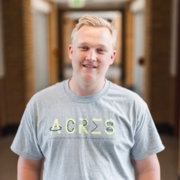 Every year, as the snow melts in Michigan, the Red Cedar River's discharge drastically increases and water spills onto the Michigan State University's campus. This interrupts life on campus, and roadway closures cause mass confusion for commuters. It's important to monitor the temporal change of a river's upstream activity in order to issue flood early warning for its downstream. As a river flows and interacts with its bed and banks, a fraction of the energy of the river can be transferred into the earth media outside the river channel in the form of seismic waves. Previous studies have shown that the change of seismic wave energy content measured outside the river channel is directly related to the temporal variations of discharge rate and bed load of the river. The discharge rate and water level of the Red Cedar River is monitored by USGS (United States Geological Survey) water gauging station on MSU campus. In this study, two palm-sized seismometers (Raspberry Shake 3D) are installed outside and across the Red Cedar River channel to collect continuous seismic waveforms. In order to isolate the river seismic signals from other sources (e.g., anthropogenic noise or earthquakes signals), a series of data analysis methods including Fast Fourier transform, ambient noise interferometry, and power spectra density analysis will be applied on the seismic data set. The goal of this study is to identify the temporal correlation between high seismic energy and drastic increase of water discharge rate of the Red Cedar River.